offers contemporary guidelines for good management practices in the cultivation of sugarcane and production of cane sugar and ethanol. This fine book is an ideal resource for agronomists, soil scientists, extension agents, sugar technologists, engineers, consultants, human-resource personnel and specialists in the fields of teaching and technical assistance.

The book’s twenty-one chapters are organized into three sections: Fourteen chapters cover topics in agricultural management ranging from crop establishment to harvesting. Three chapters are devoted to topics having to do with processing, co-product and effluent management. Four chapters cover social development, community and outgrower topics.

Wherever possible, the authors of Good Management Practices have adopted the values of sustainability, ensuring that any recommended management practices comply with the tenets of today’s triple bottom line:

• Minimizing or avoiding detrimental impacts to the environment, both on- and off-site; and

• Ensuring that production takes place in a socially equitable environment. 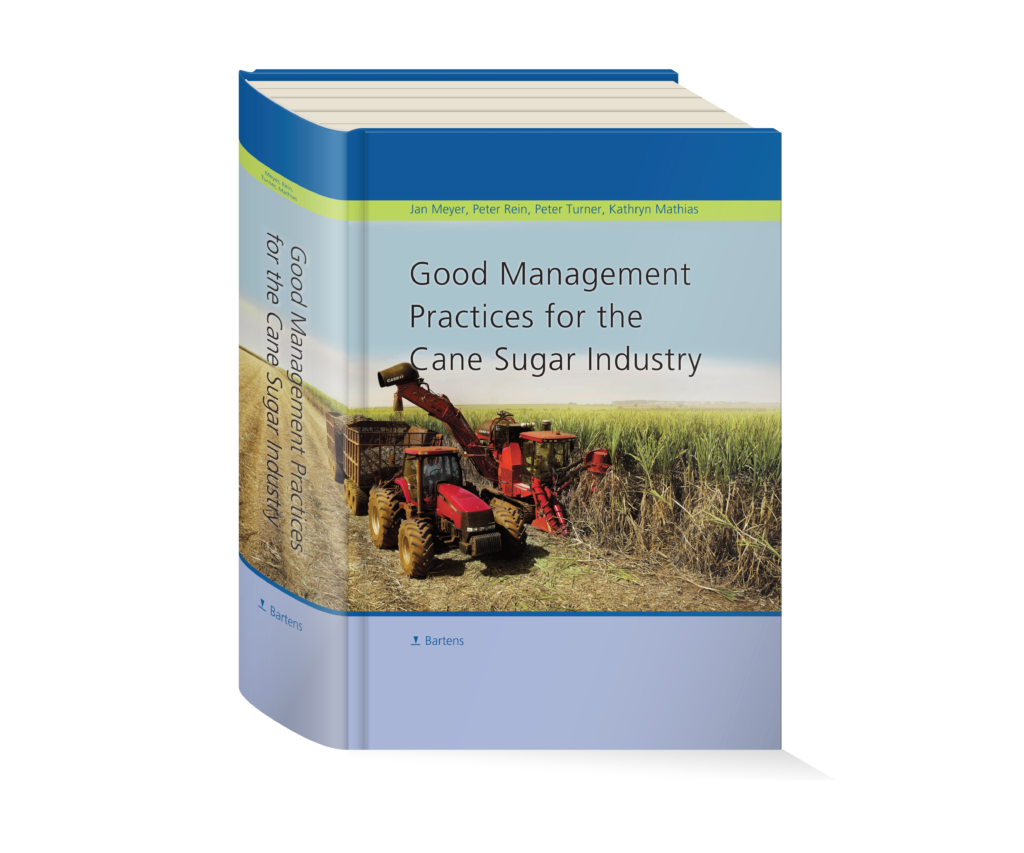 as print edition or eBook

The International Finance Corporation (IFC), the private-sector arm of the World Bank, recognized the need for a comprehensive guide to Good Management Practices for the Cane Sugar Industry. To meet this need, IFC assembled a team of authors, who have developed, managed and rehabilitated new and existing sugarcane projects in many parts of Africa. The authors bring a wide range of skills to the project, with their experience in sugarcane agriculture, environment, processing, social and economic fields.

Together, this talented team has produced Good Management Practices for the Cane Sugar Industry,which meets and surpasses the need for a comprehensive guide in the field.

The book is authored by eminent South African sugar technologists who also have extensive international experience and contacts that allowed the underlying principles of good management practice to be supported by South African and international examples.  The principle authors are supported by experienced colleagues across agronomic, factory and social issues that impact the sugar industry.  Reliance primarily on South African authors was a condition of funding from the pool of funds available from the International Finance Corporation for the project.

The detail of each chapter is distilled into summary boxes which allow the reader to refresh and reflect on the detail in the text.

The book is presented in three sections – Part 1 deals with “Sugarcane Agriculture” and covers all aspects of sugarcane agronomy; Part 2 “Sugarcane Processing Management” provides an overview of factory operations and processes, as well as discussing management of wastes and effluents and co-product production; Part 3 “Social, Labour and Outgrowers” discusses some of the regulatory issues facing cane sugar industries as well as social welfare and community issues that are of increasing focus.

The book is a recommended reference for students of agriculture, estate or plantation staff, consultants and project planners.  It will also be a valuable reference for cane sugar project funding organisations during evaluation of project proposals, as this volume stands alone in dealing continuum of field – factory – social and regulatory environments.  It is important that the potential impact of field operations on factory performance is recognised.

Dr Kingston is an agronomic consultant to the Australian and International Sugar Industries.  He retired from BSES Limited in 2011 after a 42 year career as a research and extension agronomist with the Australian Sugar Industry.  He has experience of most international sugarcane production systems and has consulted in Australia, South Africa, Tanzania, Florida, Hawaii, Colombia, Ecuador, Pakistan and Papua New Guinea and has contributed to evaluation of projects in Sudan and Indonesia.

About the Authors and Contributors

Jan Meyer is an honours and masters chemistry  graduate from he University of Natal, with over 45 year’s experience in agricultural research and advice ,primarily on crop nutrition and soil fertility related problems.
Prior to his retirement from the South African Sugarcane Research Institute in 2006, he was the Head of Crop Nutrition and Soils from 1993 to 2003 and there after a Principal Scientist until his retirement.
Since 2007 Jan has worked as a free lance consultant  dealing  with soil suitability assessments for new sugarcane greenfield  projects as well as existing sugarcane estates in Africa and abroad.He has over 120 authored and co-authored papers which has earned him a number of awards,including Gold Medals from the South African Sugar Technologist Association and the Fertilizer Society of South Africa. Leading the team of authors to compile this book on Good Management Practices in the Cane Industry has been a great honour and highlight of his career.

Dr Peter Rein is a chemical engineering graduate from the Universities of Cape Town and Natal. Prior to becoming a professor and Head of the Audubon Sugar Institute at LSU in 2000, he was Technical Director of Tongaat-Hulett Sugar in South Africa, a company he worked in for 32 years. He retired in March 2007 from LSU and now lives in England and operates as a consultant to the sugar industry.Honors include the Sugar Industry Technologists Crystal Award, the SPRI Technology Award and the South African Sugar Technologists Gold Medal. He was made an Honorary Life Member of the International Society of Sugar Cane Technologists in February 2005 and is  also Professor Emeritus at Louisiana State University . He authored a book on sugar processing entitled “Cane Sugar Engineering”, published by Bartens, Berlin in February 2007, which has been translated into Spanish and Portuguese. He has contributed chapters to 4 other books and has published over 100 papers.

Peter Turner is a graduate of the University of Natal. He is a former Head of Agronomy at the South African Sugarcane Research Institute (formerly SASA Experiment Station). Since 1997 he has worked as an independent research service provider as Sugarcane Research Services, and this has been interspersed with various consulting projects including two years as the Director of Technical Services for the Swaziland Sugar Association as well as participation in the development of the Bonsucro sustainability standard for sugarcane. Assignments have been conducted in Southern and East African countries as well as India, Australia, and south and central American countries including Brazil, Guatemala and Peru. His primary interests included weed control and general agronomy and he has published a number of papers on these subjects at sugar technologists congresses. He is currently continuing his work with Sugarcane Research Services and various consulting assignments”.

Kate Mathias holds two MSc degrees the first from Imperial College in Sustainable Agriculture and Rural Development and the second  from the University of Wales dealing with Economic and Social Studies in Environmental Resources.Kate has nearly 30 years experience in organizational development and management of small holder and outgrower schemes in a number of agricultural crops,13 years of which have been in the sugar industries primarily in sub Saharan Africa ,  with particular emphasis on EU funded programmes in Malawi and Southern Africa and World Bank/IFC funded programmes across the region. This experience and  extensive knowledg of Sugar Industry, trade and regulatory frameworks, institutions and networks, led to her participation in preparing her section of the book dealing in good management  practices for sustaining the social, community and out grower links in the value chain.

The late Dr Jeremy Gosnell was a graduate of the University of Stellenbosch. His varied career commenced in 1963, lasted until 2012 andencompassed both sugarcane agriculture and milling technology in a variety of positions, includingresearch agronomist, research station director, sugar estate general manager, and membership ofthe board of the largest sugar company in Africa, Illovo Sugar Ltd. Jerry’s work covered mostsugarcane producing countries in Africa, he published and consulted widely and he came to begenerally regarded as the doyen of sugarcane technologists in Africa.

Roger Bailey is a graduate of the University of Reading with almost 50 years’ experience in agricultural research and advice, primarily on the control of plant diseases. From 1975 – 2000 he was Head of the Pathology department and from 2000 – 2006 he was Assistant Director at the South African Sugarcane Research Institute. Roger has published extensively and is an internationally recognized authority on the control of sugarcane diseases. He is semi-retired but consults regularly internationally.

Dr Vaughan Spaull was awarded his PhD in nematology from the University of Reading, UK. Just prior to that he was employed as nematologist in the South Orkney Islands with the British Antarctic Survey and later as a biologist on Aldabra atoll with the Royal Society. Thereafter he joined the South African Sugarcane Research Institute at Mount Edgecombe, where for a period of 32 years his primary interest was the control of plant parasitic nematodes. He is now retired, apart from undertaking some writing and editing.

Dr Rob Donaldson is a graduate of the University of KwaZulu-Natal (BSc, UED, MSc, PhD) and taught at Senior High School for six years. He joined SASRI in October 1980 and served as an Agronomist for 26 years during which he published papers on Nematicides, Chemical Ripening, Flower control, Potassium nutrition and a range of issues related to Physiology of sugarcane. He is currently semi retired and is consulted on matters related to sugarcane physiology and continues to publish in scientific journals and books.

Dr Peter Lyne was formerly the Head of Bioresources Engineering and Environmental Hydrology at the University of  KwaZulu Natal and Principal Engineer at the SA Sugarcane Research Institute. His interests have involved biofuels, energy, mechanization in agriculture, transport systems and supply chains. Since retiring he has worked as a consulting Engineer.

Mike Copeland graduated from London University and Cranfield Institute of Technology. He works as an independent consultant mainly on sugarcane development projects, particularly the design and implementation of irrigation and drainage works. Based in South Africa, he has professional experience throughout Africa and parts of the Middle East.